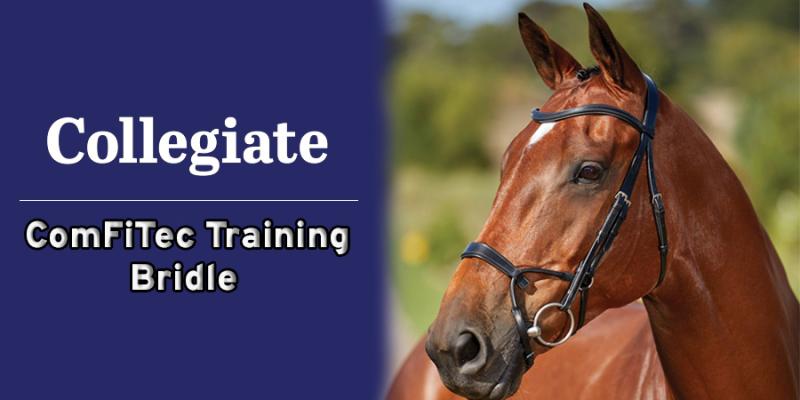 The Collegiate ComFiTec Training Bridle is made from high-quality European leather. The anatomically shaped headpiece distributes pressure evenly across the poll, giving comfort. The shaped padding placed around the horse’s ear and the double padding over poll area minimizes the pressure.

What did Robyn think?
My horse Bailey is known by most as “The Yellow Peril”. He is opinionated, extremely large, the colour of custar. He has an ego even bigger than his bottom. This means that anything new we test out is done so in a controlled environment. People poised with their fingers hovering over the “9” on their phones, ready to call an ambulance. Just in case he doesn’t approve of the new bit of kit we are testing out.
The last time I tried anything new, we tested a Waterford bit! this was to try and stop him grabbing hold of it and putting his chin on the floor out hacking. He rejected me with such force that I ended up sitting OUTSIDE of the arena! He was standing at X looking extremely smug!  “I don’t think I really like a Waterford mouthpiece thank you”.

With this in mind, you will understand my reluctance to “rock the boat”. The test out the new Collegiate ComFiTec Training Bridle. This is an anatomical bridle, designed to avoid all major nerves and pressure points. These are on the horse’s face, making it much more comfortable for the horse to wear. ComFiTec comes from “comfort, fit and technology”, all three of which this bridle has in spades! For the five years I have owned him, Bailey has been ridden in a simple padded cavesson bridle at home. His noseband swapped for a grackle at competitions. This was due to his love of crossing his jaw and careering up the centre line past the judge’s car. Or veering wildly PAST the cross country fence he is being pointed at and aiming for the crowd instead. I was persuaded to try the ComFiTec. However, as I have friends who have had success with it. My Yellow Peril has never been entirely settled in his head carriage. He can work beautifully, but the beautiful sections of his work are punctuated with general gobbiness. Flicking his tongue over the bit and flapping it around wildly. Fairly spectacular rein snatching when he gets tired. My first attempt was unsuccessful as my horse has a head like a Range Rover. Normally full-size head is most definitely a warmblood size in Collegiate. I would definitely recommend sizing up in these bridles as they seem to come up a little small. Second attempt however, the bridle fitted beautifully. I particularly like the fact that it still looks mostly like a “traditional” bridle from a distance. The leather quality is beautiful, every last inch is padded wherever it will touch your horse. The head piece in particular definitely passed the “squidge” test!

I tried lunging him initially (having learned from the Waterford incident) and was absolutely amazed at the difference. I instantly had a horse who was softer, more relaxed, working through from behind. The much more settled in his head. He dropped his nose to the floor instantly and floated round me in a huge, loose trot. Looking better than I have ever seen him look on the end of the lunge line! Feeling brave and buoyed up by the lack of explosions on the lunge. I hopped on, and had one of the best schooling sessions I have ever had on him. He was light in my hand, still in his head carriage. Eager to take the bridle forward and work into a beautiful elastic contact. The only thing that felt like it was holding us back then was my riding. I’m sure someone better, less wonky than me would have produced some stunning work with him that day. It is safe to say that I am a convert. I now have three ComFiTec bridles hanging in my tack room. One plain brown Training Bridle for every day, one plain brown Training Bridle for competing. One sparkly blingy black Crystal Bridle. For the days when we feel we are going out pretending we’re dressage divas. (With feet like a dinosaur and a head like a truck…). My horse is happier, softer and so much more relaxed in his ComFiTec bridles. I don’t think I will ever use anything else now!

We love reading your reviews! Send us your reviews to [email protected]
Follow us on Facebook for more reviews!