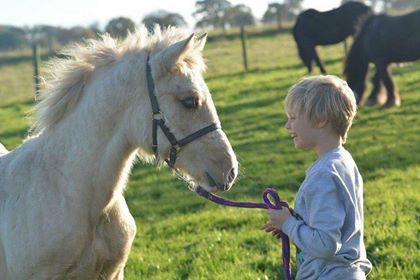 Here at Equine Superstore, we like to hear many different voices of the equestrian world. This week, we spoke to Bridget from Helping Hooves, an equine assisted learning centre in Derby. Here’s what she had to say about the equine therapy they do, helping people suffering from conditions such as depression, anxiety and PTSD.

As a young mum, some 20 years ago, I admit I struggled with life a bit. I was well supported and loved, had a steady job and a lovely family but then life took some unexpected turns as it does for many of us. I lost my dad and several other significant members of my family and very soon I was starting to feel that life was hard.

The one thing (outside of my family and friends), that would be guaranteed to raise a smile and put things into perspective was time with some ponies. I had ridden and loaned ponies as a child, worked in stables as a teenager and the thought that I might one day work with them never really left me.

Many years later, I had the opportunity to loan a horse again. I reignited the feeling that being around horses was very good for the soul. After almost three years, it was time to move on from that loan situation. I was offered a pony who had trust issues. Pulled from pillar to post, half broken here, re started there, it was clear that this 14.1 little welsh girl wasn’t really sure what would happen to her next. When I took her on as a project I knew she would be a slow burner.

We couldn’t do all the normal things people do with their horsey friends, Star had become too sharp and frightened. She needed time. But in working with her, building trust and taking the time to understand her, something else began to niggle at my mind.
Everyone was telling me she needed to ‘put her old life behind her and accept a rider, get on with it and forget the past.’ But that doesn’t really work with equines. They hold no resentment, but if you push a horse hard enough that clear look of distrust may never leave their eye. My girl needed a job. But I thought, what job!? And so began my journey to open Helping Hooves Derby.

I’ve been married to an ex serviceman for almost 12 years now and we both understand the mental health issues that many of his friends and colleagues experience. My own mental health and that of several of my friends and family had taken a battering over the years , and although we always drag ourselves up eventually, I figured there must be an easier way. Star by this point had been with me for 18 months or so, we were starting to get somewhere – slowly!

I looked into becoming a facilitator within equine led learning. I knew Star would make it her job to learn to trust people again and she did. We trained and trained until I was as sure as I can be that our relationship was one that I could trust and read. I knew it was imperative that I was able to understand what she was thinking by her body language.
[soliloquy id=”2591″]
At the same time we started looking at how learning to problem solve with a horse could relate back to every day life for us as humans. We all know how anxiety feels and understanding that through the eyes of another creature is something very enlightening.

Whilst we were training we had a new member of the clan delivered. Diego joined us in February 2017 as a gangly little 3 year old. He too started training when he settled in. After a few months we managed to find a suitable patch of land and we moved to open the Equine Led Centre . When we moved we ‘somehow’ ended up having another herd member join us, in the shape of our beautiful 5 month old filly Theodosia (Teddy).

We allowed the ponies to settle in their new home and our first clients started to arrive in mid November 2017.
I knew that this type of work would be rewarding, but honestly I had no idea how enlightening teaching could be: allowing my horses to teach emotional understanding through groundwork and clients getting to spend time with the herd in a natural environment.

We now have around 20 clients visiting a month, some come every week, some every month and some in between.
None of our horses are ridden. That doesn’t stop people from enjoying every aspect of being with them! We play games, meditate, offload our weeks emotional baggage, tell them stories and have quiet reflection time. We groom them, take them on walks and forage adventures. We learn from them and we learn to trust them.

In doing so we learn our own human limitations and triggers. We learn how to deal with anxiety and stress, and discover how far we can push ourselves (and them). We achieve things we really didn’t think we would manage!

One of my most favourite exercises is once we’ve taught a client some groundwork, we get them to a stage where we have them lunging two horses at once. I love seeing their faces light up when they realise they are in control of the carousel, and it’s not frightening to them. It’s a milestone moment and one that I doubt many will forget.

I love my ‘job’ as a facilitator. I love to see people grow in confidence and understanding and the relationships they build with the ponies.

Our ponies have helped many people with many different conditions, from social anxiety to depression to PTSD.  A socially anxious 5 year old client arrived with his mum, refusing to engage or even get out of the car. Several months later, he was telling everyone about ‘his three ponies’ and ‘his special boy Diego who he goes to see when he feels scared or sad’. This client’s relationship has blossomed so much that now his mum can’t get him out of the car fast enough! His eyes light up. Even when he’s having a bad day, he knows that he can control his sessions in a way he gets most from them. Sometimes he plays games, the favourite for him being the paper chain leading game we play in the run up to Christmas (and apparently at any other time of year when the little chap finds we still have paper chains lying around!). Sometimes we just hang out, feed carrots to the ponies and talk about life . It’s something quite magical to watch.

A client with OCD contamination issues arrived, unable to touch the horses with naked hands. Over time they were able to remove the gloves and groom the ponies themselves. A massive achievement and again very special to be a part of.

There are so many ways that an organisation like Helping Hooves can assist. And there are many more stories to tell.

Herds like ours live and work across the country. Companies providing ground work therapy and ridden therapy are ready and waiting to hear from you!

If it doesn’t challenge you …. how will it change you ?

Bridget, Star, Diego, Teddy and the rest of the HH team thank you for reading x

You can follow OUR story on Facebook, Twitter, Instagram and our website . Or maybe if you’re local enough, you want to join us and write your own story! We cater for all ages from 5 upwards. No ridden work is required, it’s all groundwork.