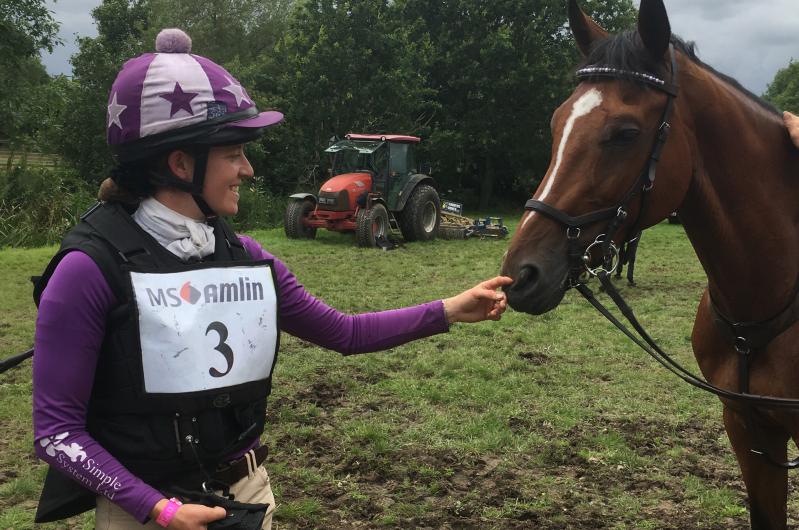 Our featured rider Georgie is an up and coming event rider who has been a member of British Eventing since 2007. She has had great success since then on the 4 horses she competes. We spoke to her to hear a little bit about her riding career!
Why/how did you first get involved with riding?
I have been round horses all my life. My Mum rode at Badminton and my aunt evented up to 3*. I have got photos of me on a horse at about 6 months old and got a Shetland called Skipper on loan when I was 3. I was very lucky that my aunt had a lovely yard at her house so I have always been able to keep my horses there and spend every day I could with the horses.
Do you have any riding icons? If so, why do they inspire you?
Growing up, like all horsey girls of my age I worshipped Pippa Funnell. She won the Rolex Grand Slam when I was 10 in 2003 and she always produced a faultless dressage test and made it happen XC even if she wasn’t having the easiest round.

Now my idol is Scott Brash. He has all his horses so well schooled and jumps round the most difficult tracks in the world like I would hope to jump round the 1.10m at a local show. He is sympathetic, always quick to reward the horses and never blames them for a mistake, which is something I aim to emulate.
Tell us about your horse(s)?
I have 4 horses and they are all bay – no one seems to be able to tell them apart at a glance!

Coco (Sjapo Le Sursaut) is my top horse, he is an 18yo bay gelding owned by Liz Maybury. He is just getting better and better with age. This year alone he has jumped clear round another Advanced, jumped round the Hickstead Eventers Challenge finishing 10th and won me a car by finishing leading points scorer in an accumulator series run at South of England 1 & 2 and Eridge Horse Trials.
Joey (War Horse) is a 6yo bay gelding who I bought last year. He is a show jumper really but also loves his cross country and has been placed at BE100 level eventing this year. He has recently made the step up to Newcomers BS with ease and I hope he will eventually jump round some 1.40s and the Hickstead Speed Derby would be the dream!
Hudson (Greenlanes Hudson) is a 5yo bay gelding who I got from his breeder, Peter Greenaway, to produce to sell. However he was too nice a horse to let go so my parents and my aunt and uncle clubbed together to buy him for me. He has jumped up to Newcomers BS and been placed at BE100 level eventing. He is related to Coco and I hope he will be my first 4* horse.
Lily (Symmetry) is a 12yo bay mare. She was bought as my first horse in 2010. She has taught me a lot about the ups and downs with horses. She has been very unlucky with injuries which have played a major part in her career. Between injuries she won the BE100 JAS (Jumping and Style) Final in 2013. In 2015 she had 2 wins a 2nd a 5th and a 6th at BE100 and Novice level. Unfortunately she had an injury in the summer of 2015 and came back at the beginning of this year. I now ride and compete her barefoot and off the field which she absolutely loves.

Where is your favourite place to ride?
Eventing: Barbury is an incredibly run event with a super atmosphere. However our most local event, South Of England, is an old favourite of mine. I have had some of my best rides and best results at South of England.

Show Jumping: Hickstead. I have been jumping regularly at Hickstead since 2013 and it is such an educational show. You rarely get to jump in beautifully maintained, large grass arenas any more so this is a fantastic chance.
Why did you choose to become an event rider?
I wouldn’t say I chose to become an event rider as such, I just seem to have ended up doing it. Growing up I was a very active member of the Surrey Union Pony Club and took part in all Pony Club Activities. Mounted Games, Tetrathlon, Show Jumping, Eventing and Dressage. However I loved the buzz of XC and my horses were well suited to eventing so that is what I ended up specialising in. However I also love my show jumping and have competed up to 1.35m.
How do you prepare for a show? Any weird superstitions?
I like to make sure everything is organised the night before I go if we are leaving early. However no matter how early we have to leave I will always plait the morning of the competition. I always wear odd socks and have a different belt for each phase!
We recently watched you ride at Hickstead, how did it feel to ride at Hickstead alongside world class riders?
I still can’t believe that I had the opportunity to ride in that famous arena. I watch the video back regularly and still get goosebumps. I was so excited to have the chance to compete against some of the best riders in the world and when I walked the course and saw the crowds I just wanted to make sure I didn’t embarrass myself. Luckily Coco and I had a dream ride round and finished a very respectable 10th.
What do you aim to achieve in the future?
My ultimate dream would be to jump round Badminton. But realistically I am a long way off as I have two young horses that are just starting their career. Short term I would love to get Hudson to Royal Windsor Horse Show to jump in the 6yo classes and for Joey to qualify for the Newcomers Final at Horse of the Year Show next year.
What is your favourite piece of equestrian equipment you own?
My Micklem Bridle. I have never had a horse who doesn’t like it. It sits so still on their head and I think it looks really smart. I wouldn’t dream of riding any of my horses in anything else.
If you could design any new piece of riding equipment, what would you make? (however weird and wonderful!)
I am not known for my ideas or originality. If I ever had to make something at school it would be horse themed. I can’t think of a piece of equipment I need that hasn’t been invented already!
What’s the most important piece of advice you’ve learnt whilst riding?
I have learnt 2 big things through riding.

Never take short cuts, as it only comes back to bite you in the long term. Get the basics right and the rest will follow
Keep calm, sometimes it doesn’t go how you would expect but horses don’t understand why you may lose your temper. ‘If a horse says no, you have either asked the question wrong or you are asking the wrong question’ is a quote from Pat Parelli and although I don’t agree with some of the things he does, this quote is very apt.

Keep an eye on the blog for reviews from Georgie and our featured riders!