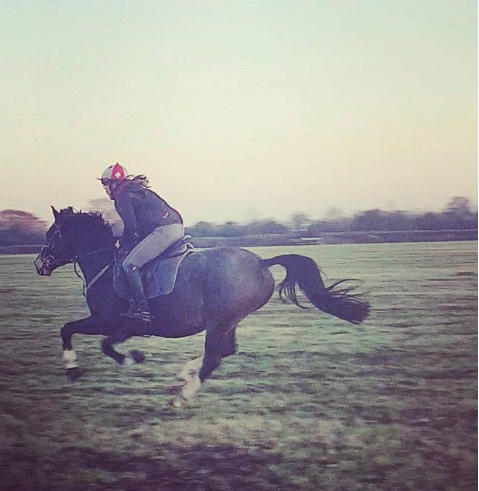 You feel like that too? Where on earth has this year gone? I can categorically confirm I have achieved nothing with my horses this year for the first time in decades.

Yes, ok, I have an excuse. Barely. Broken back and all. But, I do think it’s about time I share with you what has been going on with this spine of mine.

I have problems with it yes, but sadly with the current situation of our glorious country, I’m just having to crack on by myself. So yes, I have nerve problems, dang if I sleep on my left side, I can’t begin to tell you how much my hips and lower back ACHE for the next following days. Yes, I have gone to the doctor, numerous times. Yes, I was referred to a neurologist who tested my reactions within my legs, or lack of rather. Yes the left foot has less feeling than the Ice Queen. And no.. nothing has come of it.
Now no, this isn’t drivel, drivel, whine, whine I promise my lovely readers. Because rather than getting mad – **I’ve rejoined the real world**.

I’ve returned to full time work again. I am back in the world of Property Maintenance, with a legitimate way of funding my half tonne beasties. YES! The light is at the end of the tunnel. My god its been daunting as hell. Sitting for 9 hours has been a struggle to say the least with the return of a fair amount of nerve pain and unfortunately, private physio has had to stop due to lack of funds and the promised physio through the system never seemed to appear.

But the fact is… I get to keep my horses, I have had a return of sanity and now I am rebalancing out ready for the New Year. I have struggled somewhat mentally, not just physically over the past 6 months realising that I just cannot ride to what I used to at the start of this year. Saying that, riding to the same ability was actually not my biggest worry, the worst was how to keep them, how to survive. Probably quite an important factor. But its over now. Back in the real world.

We’ve had a fantastic year with the weather holding out – Us lucky buggers still have turnout on our clay bogged land somehow and it has given me a bit of relief. The Libster is back in light work, including canter with myself. I have worked out a routine of which she goes on the walker for 20 and then I ride. I seem to be really struggling with trot work for more than a couple of minutes before the back starts burning so if I have her already out and walking, it helps me with her warm up. Canter is much easier, and I am so delighted to realise that she hasn’t returned to the ignorant stubborn little 6 year old she used to be. I am what you would call a smug mother of her now. This does make it sound like I am riding like a demon. I’m not. I’m riding two to three times a week and no more than half an hour at the maximum which I have slowly increased from 10 minutes’ walk
over the past weeks.

Bella is as Bella does. She’s coming up to 20 next year and frankly, is well aware of it and lording it over everyone. I am at the stage that I cannot even hold her when turning her out. Headcollar on, lead rope over the neck and open stable. I meet her at the gate which I open, and she proceeds on her merry way to her field. It’s a routine. She’s basically a half tonne of dog with hooves sporting purple hair and a cane.

Simply put, I’m finding my way again. It’s been a really tough year and I’ve had many, many people along the way carrying me (sometimes literally), helping me and guiding me to keep going on, including some of you so thank you very much for the support thrown out to me. You’re worth your weight in gold.

So in the mean time, have a very Merry Christmas. Ensure that you give your Guinness to your ponies on Christmas Day, come on. You’re not the only one allowed a drink and start making those
dreams into plans for the New Year. Because if I can do it, each and every single one of you can to!

Biggest hugs and kisses to you all you Equine Superstars.

Josephine, The Libster and Bells xx